Spy fiction is so deeply coded into the DNA of western culture that I’m surprised mothers aren’t spitting out top-secret agents, yet it’s a genre I’ve never taken the slightest interest in. Infiltrating an enemy base and saving the day and the dame sounds thrilling and all, but I always took more toward those huge, flashy shonen battles where our hero’s on the verge of defeat until he pulls a new superpower out of his armpit hairs and whups the opponent into next Thursday. So if an avid manga reader came along and recommended Spy x Family, a series whose genre is also one half of its title, I would give it a pass, until, that is, I saw its MAL score. I fancy myself a connoisseur of the finer stories in life and thusly am always on the prow for a good read, so all a series needs to do to catch my attention is showing those big, round, juicy, voluptuous ratings, and I’ll be a dog begging its master to pet it.

Political tensions between the nations of Westalis and Ostania are through the roof, with both aiming to destabilize one another through espionage and assassinations. Westialis’s top spy, codenamed Twilight, is tasked with investigating a politician and learning all of his dirty little secrets. Easy-breezy, except that Mr. Target only ever leaves his house to attend his son’s school events, so he wouldn’t much appreciate it if Twilight hopped in his window and quizzed him on his political know-how over tea and crumpets. To accomplish this, he takes on the identity of Loid Forger and cobbles together a faux family consisting of a daughter to admit to the school and a wife because the administrators there don’t believe in single-parent households. He keeps his identity as a spy secret from them, but his newfound wife and adopted daughter are keeping secrets of their own. 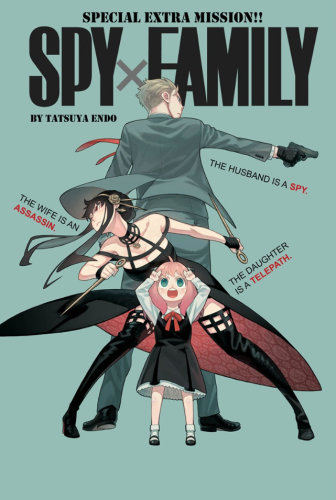 Anya is first up on Twilight’s family recruitment list, and she’s by far and large the star of this manga. Born to unknown parents, she was raised in a lab and experimented on until she gained telepathic powers. She managed to escape and had since jumped from orphanage to orphanage, being adopted out several times but always returned shortly after due to her many surrogate parents not reacting kindly to her apparent weirdness that comes with being able to read minds.

Her backstory is a tearjerker when you listen to it with a few shots of alcohol in your system, but it’s nothing she mourns or cries over. Like any child, Anya just wants to be part of a loving, caring family and will go to any lengths to ensure she can preserve Twilight as her father, even doing her darndest to guarantee her academic admittance and success at Eden Academy for the sake of his mission. She’s also aware of how much power she holds in their relationship, throwing tantrums or threatening not to go to school when the adults won’t give her what she wants, and because a discontinuation of her enrollment means an instant mission fail, they kowtow and bend to her whims. Anya’s a simpleton, being no older than four or five, but she’s so hilarious and so genuine in who is and what she wants, and seeing how adorable she is is almost enough to make me want to reproduce and have an adorable offspring of my own.

Wife is the second role Twilight goes shopping for, and the woman he finds for that fill-in is Yor Briar. She’s a civil servant by day, but by night, she’s the top-notch assassin Thorn Princess, infiltrating gang hideouts and cleaning them out without getting a scratch. She’s content with her standing in life as a perpetual single, but the political climate draws extreme suspicion on unmarried women in their mid-twenties, and becoming the target of eyebrow-raised counter-intelligence isn’t advisable for maintaining the secrecy of her night gig. So she gets herself a man and agrees to wed Twilight and become Anya’s stepmother.

Also, she can kick speeding cars.

When I picked up this series, since Twilight was a seasoned veteran and this was just another job for him, my expectation was that Anya’s enrollment would be the first arc, and from there his missions would roll out one after another. Slight spoiler, that being that he does get Anya admitted rather rapidly, but from there it sets itself up for the long-run by moving the goalpost from admittance to earning enough gold stars that she can enter the esteemed honor system, the Imperial Scholars, target boy’s son is a member of. But just to heighten the tension, there’s also a demerit system that nets her expulsion if she gets in trouble enough. So for Anya, who’s not exactly fit to be at the school in the first place, it’s a race to see if she becomes an exemplary member of society first or botches things up enough that she gets the boot.

The manga has a great many praises, the best of which has to be that it’s downright hilarious. Standing at the center of the overwhelming majority of this series’s gags is Anya. The most common is her reaction to the monologues of her parents regarding espionage or assassination, but that’s a starting point they reach out from. Various aspects of her character development germinate from comedy, from dealing with bullies to the flimsy excuses she comes up with to help her parents without tipping them off to her telepathy. Things tend to work out for her in the end, though her execution leaves a lot to want, but there’s a charm in seeing this girl do her best to keep her family together and happy.

Talking about how well Anya is written is a microcosm for how well this whole manga is written. From how chapters are set up to how scenes are realized, everything is sharp and witty, gives us the most out of its characters, and doesn’t let its cold-war-esque setting ever get too heavy-handed. It’s also willing to take a moment to step back and let the family be together, showing us, despite how they’re tiptoeing around one another with their closely guarded identities, how much they do care for each other beyond the mutual benefits their relationships grant them. You see this predominately in Yor, who quickly comes to care for Anya like she were her real daughter and even proclaims to others that she is her mother. Twilight remains the most aloof of the three, but he has his moments where you see his spy facade chip for a genuine affection for Yor and Anya.

The manga does have a bad case of ADD, however. A lot of side stories permeate its run, and even the main plot gets distracted by sending Twilight on a myriad of missions unrelated to Operation Strix (that’s the name of his mission to infiltrate the school, FYI). These side hustles do bring refreshment, as we get to see how the characters put their strengths to use in sometimes goofy scenarios or fall face-flat in mundane ones, but it makes the overarcing narrative feel like it’s dragging itself forward by its toenails, and if there were an entire volume or two dedicated to Anya’s school days, I would be completely satisfied with that.

On the topic of stuff I would like to have more panel space, there’s Yor, more specifically her assassination missions. We’re aware that she’s doing them, but the series can’t be bothered to show us more than a page or two at a time, then it’s back to her being a housewife. It does make up for this by having her be a total BAMF who demolishes anybody who even so much as thinks about touching a hair on Anya’s head. I can watch her superkick cars all day, but I’m hoping in the future that her assassinations come to the forefront and even cause a conflict of interests with the life she lives with Twilight and Anya.

There’s a lot more to look forward to in this manga, I suspect. As it is, Twilight’s slapdash family is built on a shaky foundation, and the story has the habit of lighting fuses leading to powder kegs, and it’s just a question of how long those fuses are. Some of them may wind up being duds, but even if that’s the case, the sparkles will be bright and colorful and maybe remind of a shooting star, and then Yor will drop from the sky and superkick a toady to the moon.

View all posts by C³